A cold, damp rainy night wasn’t enough to stop Berklee alumni and others from converging on one of Nashville’s coolest venues, The Rutledge in what would be the first Nashville Berklee Jam to be held in downtown Nashville. Monday, February 18 marked the one-year anniversary of this event which had previously been held in the suburb of Kingston Springs, and the move to downtown aims to kick the event’s profile up a notch as this centrally located venue is perhaps one of the finest performance rooms in the city. 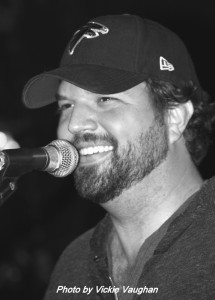 People began rolling in around 6:30, and the guest speaker on this night, 2012 NSAI, ACM, and BMI songwriter of the year, Dallas Davidson began his portion of the night shortly after 7:00 PM. Dallas, Rhett Akins, and Ben Haslip, make up the songwriting team known as “The Peach Pickers”, who in recent years have become the most successful songwriting team in the history of Nashville. Since moving to Music City from Albany, GA in 2004 Dallas has had over 100 of his compositions recorded including 13 number one hits – “Gimme That Girl”, “Just a Kiss”, “The One That Got Away”, and “I Don’t Want This Night to End”, to name a few.

I gave him a brief introduction, he spoke briefly about his journey to Nashville and how he got his start as an “in-the- trenches commercial songwriter”, and then he quickly got into some questions and answers.

In response to a question about naysayers along the way during the years leading up to his recent success, Dallas candidly responded:

“The list is long and distinguished… starting with my dad… [Laughs]… a lot of publishing companies passed on me, all of ‘em did… the first time around and the second time around.”

He went on to tell of how he got his first big break, a story which underscores the importance of a person’s character.

“A guy named Brett Jones actually signed me to a publishing deal. He started a company called Big Borassa, I was his first writer that he ever signed, and he swears that he didn’t even listen to my songs; he just got to know me and believed in me… I was very, very fortunate to have somebody like that guy come in there and give me a shot and write with me and teach me a lot of stuff.” 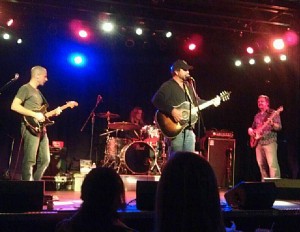 Dallas spoke about how he uses his small-town roots to provide topics to write about, as he wants to be “the mouthpiece” of his rural friends. He shared that he likes to write the melody first, then the groove before starting on the lyrics.

In response to “What advice would you give aspiring songwriters?” Dallas replied:

You’ve got to write a bunch of songs… I mean this in the friendliest, competitive way… your direct competition is me and Rhett Akins and were writing 100 to 150 songs a year… Work harder than us and believe in yourself, because that’s all we did… don’t take no for an answer…

Concluding his portion of the night was a mini set of four of his recent number one hits, which we were fortunate to capture on video (courtesy Jack Zander). The band behind him on this night consisted of the players who backed Dallas and Rhett Akins on the 2012 Luke Bryan Farm Tour – Tom Good on bass, Nick Forchione on Drums, and me on guitar. Dallas’s heartfelt performance was well received, and upon its conclusion I thanked him and took a few minutes to reorganize for the jam portion of this event (which will be explored in part two of this blog). Meanwhile, please enjoy the videos below from Dallas’s performance!

The One That Got Away

I Don’t Want This Night To End